Freewallet, a mobile-first cryptowallet developer, has presented a full-scale Multi Wallet version for desktop. This significant release tops off 2017 run by the company that has accomplished 8 new currencies this year including such ambitious projects as the world-first Bitcoin Cash and Bitcoin Gold wallets.

In less than 2 years, Freewallet team have released more than 20 dedicated apps for popular cryptocurrencies and tokens. Shortly after the release of the mobile Multi Wallet for Android and iOS the team started receiving plenty of requests to proceed with further development of a service for storing, managing and exchanging various coins in one place.

“We were initially planning to deliver solutions for each coin and its corresponding network individually,” Alvin Hagg, Freewallet co-founder, recounts. “That seemed logical at that time because there was a community with unique goals and needs behind each coin. However, we soon discovered that a vast group of people didn’t limit their portfolios to a single cryptocurrency and were inspired by the blockchain technology in general. That was exactly why we decided to bring the Multi Wallet to a whole new level.” 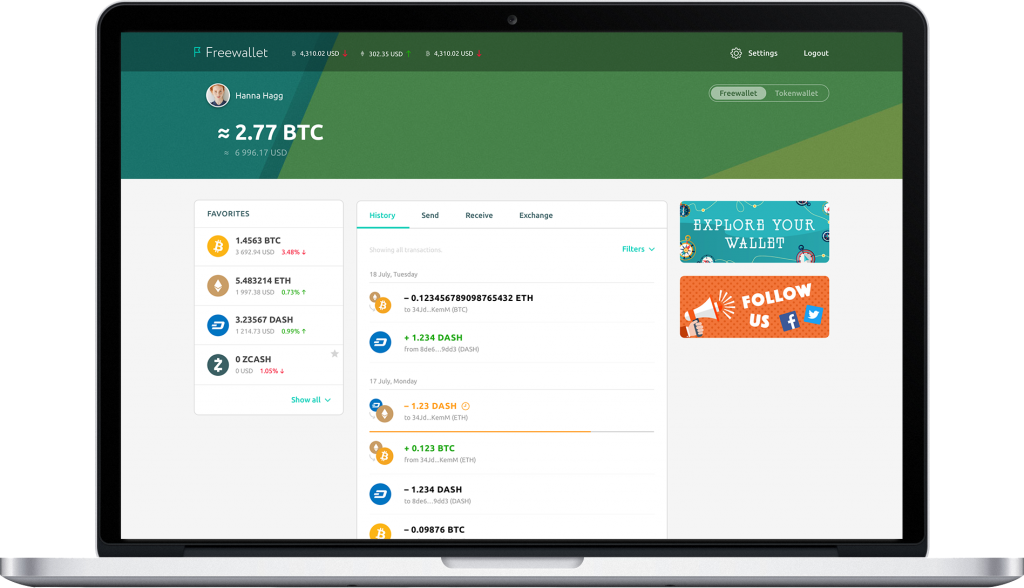 After months in beta and extensive testing, the web-based Multi Wallet is currently available in full on Freewallet‘s website. After logging in with the preferred authorization method (e-mail, Facebook, Google+ or mobile number) users have access to a variety of features including the signature one: free instant transactions of the same coin among Freewallet users. This option comes especially handy these days when even major networks (such as Bitcoin) are massively overloaded, resulting in delays in transactions and spiralling fees. Being able to move coins instantly and at zero charges is crucial for our customers, and Freewallet is proud to offer an optimum solution to them.

Other unique options presented both in Multi Wallet and other Freewallet apps feature fast and simple integrated cross-currency exchanges and a multilayer asset protection system with customizable email confirmations, the PIN code and 2-factor authentication.

The Multi Wallet for the web would be a great choice not only for multi-asset holders looking for extended mobility but also for Freewallet users with Apple devices in particular. Most coins and practically all tokens used to be available in the Android app only due to the lack of Apple’s support for them. However, with the new Multi Wallet, it’s now possible to view and manage the uncapped selection of crypto assets that Freewallet offers.